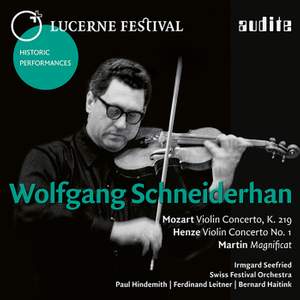 An outstanding violinist of the twentieth century:Wolfgang Schneiderhan, born in Vienna in 1915, was concert master of the Vienna Philharmonic for many years before turning to his solo career entirely. As a chamber musician - for instance with his Schneiderhan Quartet or in the trio with Edwin Fischer and Enrico Mainardi- he also proved to be influential. Schneiderhan was one of the defining artists in the history of the Lucerne Festival: between 1949 and 1986 he gave an amazing forty-two concerts; as Georg Kulenkampff's successor, he directed the masterclasses over several decades; and in 1956, together with his former student Rudolf Baumgartner, he founded the Lucerne Festival Strings.

The range of Schneiderhan's repertoire is also displayed in these three Lucerne live recordings, now released for the first time. His commitment for the music of his time becomes particularly evident: he performs Henze's highly virtuosic First Violin Concerto (which he would go on to record on disc as well, with the composer conducting) alongside Martin's Magnificat.The Swiss composer had composed this unusually scored work, which one yearlater would be expanded into his Maria-Triptychon, for Schneiderhan and his wife, the soprano Irmgard Seefried - the Lucerne live recording of the world premiere with the two dedicatees therefore represents an exceptional archive discovery. The early recording of Mozart's final violin concerto on the other hand shows Schneiderhan as a representative of the Viennese Mozart tradition. Here, his partner at the podium of the Swiss Festival Orchestra is Paul Hindemith who can be experienced as a conductor of classical repertoire.

The 32-page booklet in three languages provides extensive background information on Wolfgang Schneiderhan in Lucerne, and also features photos from the festival archives published here for the very first time.