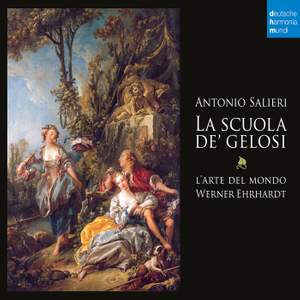 Ehrhardt elicits an accomplished account from his period-instrument ensemble and a strong, well-matched team of principals. — BBC Music Magazine, April 2017, 4 out of 5 stars More…

In its day La scuola de’ gelosi (1778) was one of the best-known comic operas by Antonio Salieri (1750–1825), remaining a box-office hit for decades. All the more astonishing is the fact that it could sink into obscurity. Even Goethe was excited by this masterpiece: “The opera is the audience’s favourite, and the audience is right. It contains an astonishing richness and variety, and the subject is treated with the most exquisite taste. I was moved by every aria.” In the wake of its world premiere in Venice in 1778, La scuola de’ gelosi was performed in opera houses all over Europe, from Dresden, Vienna, Prague and Paris to cities as far away as London and St Petersburg, before it passed into near-oblivion. Not until well over two centuries later did Werner Ehrhardt and his ensemble, l’arte del mondo, rediscover this musical treasure. Their world-premiere recording affords impressive proof of Salieri’s abilities and explores his shrewd delineation of character, whereby jealousy repeatedly rears its head in ever-new guises.

Ehrhardt elicits an accomplished account from his period-instrument ensemble and a strong, well-matched team of principals.

Salieri didn’t share Mozart’s gift for instant and succinct musical characterisation, but still, he’s more than Shaffer’s “patron saint of mediocrities”...There are no real standouts in Werner Ehrhardt’s mostly Italian-speaking cast, but all are decent. The orchestral playing has the odd rough edge but plenty of spirit.