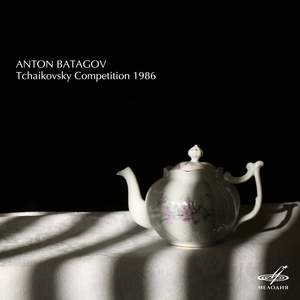 Tchaikovsky: The Seasons, Op. 37b: January ('By the Hearth')

Fans of the musician who is known as a genre-breaking composer, performer and ardent propagandist of the most radical styles of contemporary music, may find this album surprising.

Beethoven, Chopin, Scriabin, Prokofiev and, of course, Tchaikovsky are performed by the 20-year old student of the Moscow Conservatory who was not admitted to the final round of the prestigious contest but was awarded an important prize: “for best performance of Tchaikovsky’s music.”

Even then the young musician, one of the most promising pianists from Tatiana Nikolayeva’s class, was confident of his propensities. A lover of 20th century music, including that written by his contemporaries, he interprets Beethoven, Scriabin and Prokofiev with youthful enthusiasm void of academic clichés. As Anton Batagov admitted, Tchaikovsky’s music was something that he had to struggle with. Only when he was preparing for the competition, he came to realize the depth of the Russian music genius – “as an extremely lonely and extremely closed man who had an infinitely subtle perception of the world... as a man to whom life was, first of all, an impossibility of happiness.” And at the same time, a man of “absolute harmony and fabulous beauty.” These recordings made 30 years ago during the first two rounds of the VIII Tchaikovsky International Competition are released for the first time.