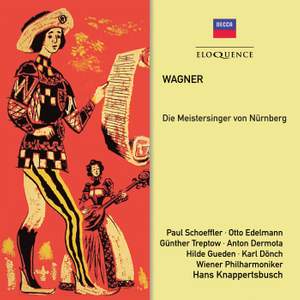 Whichever version you own or plan to acquire, this old Knappertsbusch may be the most authentic for both conducting and singing – as long as you can accept the ageing sound and disregard the... — MusicWeb International More…

Fanget an!- So rief der Lenz in den Wald

This recording of Die Meistersinger was one of the first operas released on LP by Decca in January 1952. Act II was recorded in 1950 and released separately; a year later came Acts I and III. It was also the first complete studio recording of the opera to be released on LP, and came early in a series of celebrated opera recording with the Vienna State Opera company. (A live recording of the 1951 Bayreuth Festival production under Karajan appeared at about the same time.)

It was no small achievement to get this, Wagner’s longest single opera, on disc, and not surprisingly there were some problems, particularly – as early critics pointed out – of balance, both of orchestra with voices, and between voices themselves. Yet these shortcomings are less in evidence now, and pale beside the opportunity to hear the music sung by a cast drawn from one of the great post-war opera companies – including Otto Edelmann, Anton Dermota, Günther Treptow and Hilde Gueden.

But perhaps it is above all for Paul Schöffler’s Hans Sachs, however, that this set is valuable. For many, Schöffler was the great post-war Hans Sachs. Few singers have rivalled Friedrich Schorr in this role, but perhaps Schöffler came closest. His was a warm bass-baritone voice with a wide range of colouring, as much at home in Mozart as in darker roles such as Iago. He brought to Sachs a generous and sympathetic tone evident in the monologues, particularly those in the third act (his ‘Johannisnacht’ is exquisite), but also a feeling for the humour and humanity of the piece that many other interpreters have lacked.

Hans Knappertsbusch is the other star of this recording. He coaxes playing of great sensitivity from the Wiener Philharmoniker. Time and again he shows us aspects of the music rarely revealed, conjuring up a more magical, less hectic midsummer than is customary.

Whichever version you own or plan to acquire, this old Knappertsbusch may be the most authentic for both conducting and singing – as long as you can accept the ageing sound and disregard the less than ingratiating singing of Treptow. Most of all it is a wonderful tribute to the art of Paul Schoeffler and his deeply moving human portrayal of Hans Sachs. In that respect it is a desert-island-set

The cast centres around the nobel Hans Sachs of Paul Schoeffler in one of his very finest recordings, opposite the totally enchanting Eva of Hilde Gueden...Knappertsbusch's direction is spacious.

While Hans Knappertsbusch often wielded a heavy hand over most things Wagnerian, here his conducting elicits lightness, fluidity, and genial inflection from the Vienna Philharmonic, even when the tempos err on the slow side (Act 3’s endless procession). By and large the singers are outstanding, relishing Wagner’s words without a hint of “speech-singing”.