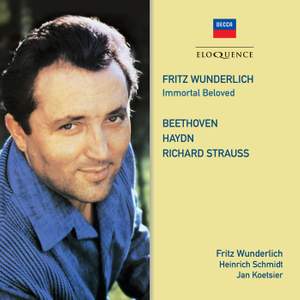 Few performances of An die ferne Geliebte are guilelessly beautiful. Haydn's Scottish and Welsh Folksongs are animated and engaging, with a selection of Strauss Lieder as dessert. — BBC Music Magazine, April 2017, 5 out of 5 stars More…

Haydn: Arrangements Of British And Welsh Folksongs - Sung In German

‘It was altogether shocking how absolutely wonderful his voice sounded … so unique, so individual, so clear and authentic – a voice that could be compared to no other.’ Rolando Villazón

‘What he did – there was no one who came close to him. I don’t think he will ever be surpassed.’ Nicolai Gedda

‘The sheer quality of his incredible voice is unique and will always be unique. Fortunately, there is the medium of the gramophone record.’ Peter Schreier

During the eleven years of his career, Wunderlich became a versatile lyric tenor who combined opulence of tone with intellectual weight. After some deliberation he turned to the heavier types of heroic roles before being invited to sing Walther von Stolzing in Wieland Wagner’s production of Die Meistersinger von Nürnberg at Bayreuth. Although his repertoire included Rossini, Donizetti, Strauss, Pfitzner, Stravinsky, Egk, Orff and many oratorio parts, he is chiefly remembered, in the recordings bequeathed to posterity, as a singer of Lieder and an exponent of Mozartian roles (Belmonte, Tamino, Don Ottavio, Ferrando). He breathed fascinating life into these roles with his cultivated tone, refinement, stylistic awareness, intensity and intelligence.

These recordings – partly ‘live’ (Beethoven, Haydn), partly studio (Strauss) – enshrine many of Wunderlich’s quality as a Lieder singer par excellence. Although previously released on Philips CD, for this Eloquence release, the recordings were re-mastered from the original tapes.

Few performances of An die ferne Geliebte are guilelessly beautiful. Haydn's Scottish and Welsh Folksongs are animated and engaging, with a selection of Strauss Lieder as dessert.

This [recording] will inform those who come fresh to his singing of his sappy tenor and eager, unaffected, articulate way of using it. These attributes are most apparent in the Beethoven cycle for which he had the almost ideal tone. This is the longing, ardent admirer of the distant beloved to the life. Wunderlich phrases this ever-attractive cycle with a secure legato, a keen feeling for the text and a natural buoyancy that produce the right sense of art concealing art … The charming Haydn settings of Scottish and Welsh folk-songs are just as admirable, especially “Mein süßes Liebchen” where the serenader, out in the frost and snow of winter, begs to be let into his lover's chamber: Wunderlich sings it with just the right brio