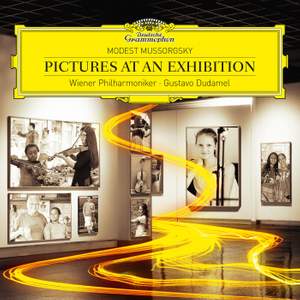 V. Ballet of the Unhatched Chicks

VII. The Market at Limoges

IX. The Hut on Chicken's Legs

Celebrating ten years as an exclusive recording artist on Deutsche Grammophon, Gustavo Dudamel's career has evolved from Venezuelan Wunderkind to one of the world's most distinguished and sought-after Maestros.

His upcoming recording, made in company with the Wiener Philharmoniker at Vienna’s Musikverein in April 2016, is an all-Russian album – it couples two works by Mussorgsky, Pictures at an Exhibition, in Ravel’s magnificent orchestration, and A Night on Bald Mountain, with the famous Waltz from Tchaikovsky’s Swan Lake. The Viennese waltz kings and Dudamel gives this perennial ballet highlight a fresh, vibrant new reading - a perfect introduction to the festive season.

Pictures at an Exhibition is one of music's most transcribed, arranged and covered pieces, a musical touchstone, inspiration to many artists and cited in popular culture on television, in film, and in video games. The brief, episodic structure of these works makes them ideally-suited for streaming and digital campaigns.

While making the album, Dudamel and members of the orchestra participated in workshops alongside young people involved in the El Sistema-inspired Superar programme. Founded in 2009 and named for the Spanish word for “overcome”, it is based in Vienna’s diverse 10th District and offers free music lessons to children. For the “Pictures Project” Mussorgsky’s work prompted a group of young people from Superar to take their instruments onto the streets, share their music-making with the local community and document the results on camera.

Images from their musical “Pictures”, selected by the highly respected Vienna-based photographer Claudia Prieler, were exhibited as part of the press event in Salzburg last week, where Gustavo Dudamel, members of the Wiener Philharmoniker and the Simón Bolívar Symphony Orchestra of Venezuela, and children from Superar met at Salzburg’s historic Hotel Sacher to launch the album.