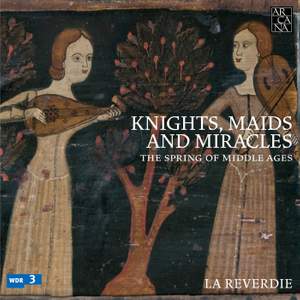 Knights, Maids and Miracles: The Spring of Middle Ages

anon.: Trew on wam ys all my tryst

Hildegard: For the Trinity (Laus Trinitati)

anon.: Miri It Is While Sumer Ilasts (Arranged by Ella de Mircovich)

In August 1986 two pairs of young sisters (Claudia and Livia Caffagni, Elisabetta and Ella de Mircovich) founded the ensemble La Reverdie. The name, derived from a poetic genre that celebrates the return of Spring, reveals perhaps the principal trait of a group that, for 30 years now, has captivated

audiences and critics alike for the variety in its approach to the vast and varied musical repertoire of Middle Ages and early Renaissance. To mark this anniversary, Arcana brings together in a single 5-CD box-set all the themed projects that, over the years, La Reverdie has devoted to various aspects

of Medieval culture. From the image of femininity to courtly love, from the music in Medieval thought to the symbolism of light and darkness, each theme developed in this musical collection – an excellent introduction to Medieval music – explores specific repertoires from different points of view, either geographical or literary and philosophical. A journey of discovery that, by virtue of the issues addressed and the freshness of their approach, gives the listener the idea that music in Middle Ages is a fantastic kaleidoscope of sounds and words which reflect the spirit of the time. The history of Europe itself resounds in this anthology of music between 13th and 15th centuries; Latin and vernacular poetry, as well as monody and polyphony, voices and nstruments feature a colourful and bright artistic landscape.