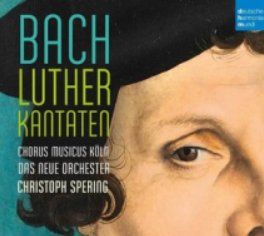 Brand new recording of all Luther cantatas composed by Johann Sebastian Bach on x4 CD's. 2017 marks the 500th anniversary of the Protestant Reformation. Half a millennium ago, on October 31, 1517, Martin Luther launched this movement by posting his 95 theses on the door of Wittenberg’s Castle Church. Two centuries later, inspired by Luther’s words, & fully in the spirit of the reformer’s aim of spreading his theories via hymns, Johann Sebastian Bach composed what is probably the most significant body of cantatas based on Luther’s texts. Now, in honour of one of the most important events in Western religious history, Christoph Spering, his choir Chorus Musicus Köln & Das Neue Orchester have recorded Bach’s complete Luther cantatas. A x4 CD set, containing x82 tracks.