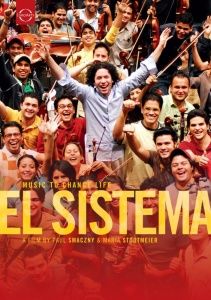 …the main emphasis here is placed upon the missionary zeal of José Antonio Abreu, the visionary politician who masterminded the Sistema… Abreu's staunchly held belief in the capacity of music... — BBC Music Magazine, Christmas 2009, 5 out of 5 stars More…

A film by Paul Smaczny and Maria Stodtmeier.

'El Sistema', Venezuela's revolutionary system of music education, brings joy and hope to the lives of hundreds of thousands of impoverished children. This lyrical and very moving documentary takes us from the rubbish dumps and barrios of Caracas to the world's finest concert halls. Children from streets dominated by the gun battles of gang warfare are taken into music schools, given access to music, and taught through the model of the symphony orchestra how to build a better society and a better world. Gustavo Dudamel is the most prominent pupil of 'El Sistema', now named as the LA Philharmonic's music director as of the 2009-2010 season.

'El Sistema' shows how Venezuelan visionary, musician and economist, Jose Antonio Abreu, has changed the lives of hundred of thousands of children over the past three decades. Abreu earned several renowned prizes for his achievements,including the Crystal Award of the World Economic Forum, the TED Prize and recently the Polar Music Prize, given by the Royal Swedish Academy of Music.

…the main emphasis here is placed upon the missionary zeal of José Antonio Abreu, the visionary politician who masterminded the Sistema… Abreu's staunchly held belief in the capacity of music to better people's lives is nowhere more eloquently illustrated than in the extensive exploration of the performing opportunities that have become available to children living in the crime-ridden ghettoes of the country's main cities.

This inspiring film, subtitled "music to change life", takes us behind the scenes of the worldwide phenomenon of the Simón Bolívar Youth Orchestra of Venezuela… Their founding father is José Antonio Abreu, composer, conductor and politician, who cuts an almost mystical figure in this stunningly photographed film by Paul Smaczny and Maria Stodtmeier. El Sistema comes with several awards to its name. Surely it can't be long before its remarkable founder Abreu is the recipient of a prize for peace?