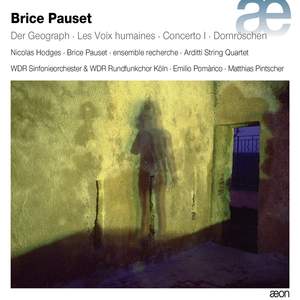 Marked by the experiments of Luigi Nono or Helmut Lachenmann, and by his practice of 17th- and 18th-century music, the French composer Brice Pauset is pursuing an original path, marked by his rhetorical questioning of earlier forms of music. This is music in tune with our own culture and, at times, would transmit its evidences. The vocal issue remains central, even in Brice Pausets catalogue: The voice as an instrument, he writes, the voice as identity (and it then literally becomes human), and finally, the voice as an instrument of identity. It is only at this moment that the musical and political can carry on a dialogue, and that music can attempt to express its time. An album of great intensity served by first-rate performers!