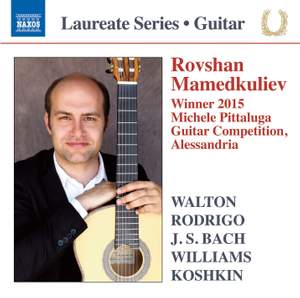 En los Trigales (In the Wheatfields)

Rovshan Mamedkuliev’s transcription of Bach’s monumental Chaconne is flanked on this recording by contemporary works that show how the guitar has inspired composers with its capacity to evoke emotion through lyricism. Walton’s brilliant Five Bagatelles are acknowledged as masterpieces of the repertoire, contrasting with Rodrigo’s joyous musical descriptions of Spain. Rounds is prolific film composer John Williams’s first solo work for guitar, and Nikita Koshkin is acclaimed as one of the instrument’s major creative artists. Described as “an impressive debut” by Classical Guitar Magazine, Rovshan Mamedkuliev’s previous recital can be heard on Naxos 8573179.