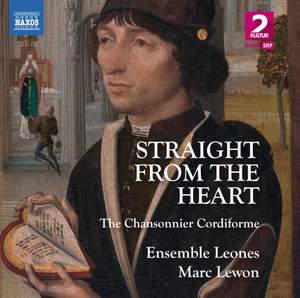 The songs provide a fascinating insight into the concerns of 15th century men and women. — MusicWeb International, 18th January 2017

The Chansonnier Cordiforme is a songbook, probably copied in 1475 for a roguish but musically cultivated priest named Jean de Montchenu – a contemporary chronicler called him ‘dissolute and full of all the vices’. The beautiful manuscript containing 43 songs is, uniquely, heart-shaped and covered in velvet. This recording presents both a representative crosssection of the manuscript’s repertoire, the majority of which is set to French texts and is among the best known and beautiful of the age, and a portfolio of differing performance options including instruments. In addition to works by such luminaries as Gilles Binchois and Johannes Ockeghem – music of elegant melody, textural refinement, and sometimes startling harmonic turns – there are ingenious and anonymous parodies of popular songs.

The songs provide a fascinating insight into the concerns of 15th century men and women.