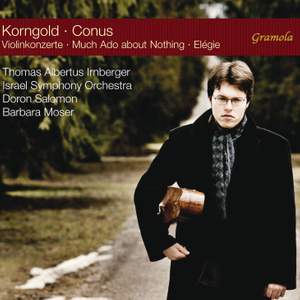 Korngold: Violin Concertos & Conus: Much Ado About Nothing & Élégie

Korngold: Much Ado About Nothing, Op. 11: suite for chamber orchestra

Austrian composer Erich Wolfgang Korngold, mainly known for his opera Die tote Stadt and his later work as a composer for soundtracks in Hollywood, incorporates in his Violin Concerto in D major, op.35, themes and melodies from his movie scores. Of composer and violinist Julius Conus, of French and Russian descent, on the other hand there have until today been hardly any other compositions discovered besides his Violin Concerto in E minor. One to be mentioned, being a world premiere recording, is the Elegy, op.2 no.1, for violin and piano.

Richly luxuriant playing of vividly Romantic repertory, distinguished by the first recorded performance of a forgotten work by Jules Conus.