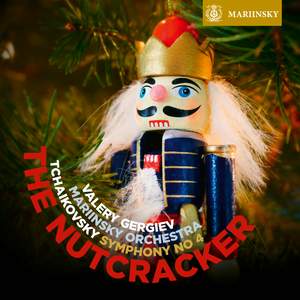 Tchaikovsky: The Nutcracker & Symphony No. 4

Gergiev paints Tchaikovsky’s dream-world in the boldest colours…the Mariinsky Orchestra plays the score with theatrical verve and virtuosity, and the crystal-clear recording really brings out... — BBC Music Magazine, Christmas 2016, 5 out of 5 stars More…

Act I Tableau I Scene 1: The Christmas Tree

Act I Tableau I Scene 2: March

Act I Tableau I Scene 3: Children's Galop and Dance of the Parents

Act I Tableau I Scene 4: Arrival of Drosselmeyer

Act I Tableau I Scene 6: Clara and the Nutcracker

Act I Tableau I Scene 7: The Battle

Act I Tableau II Scene 8: A Pine Forest in Winter

Act I Tableau II Scene 9: Waltz of the Snowflakes

Act II Tableau III Scene 10: The Magic Castle in the Land of Sweets

On the 18th December, 1892 at the Imperial Mariinsky Theatre, 'The Nutcracker' was first introduced to the world. Now, almost 125 years since that opening night and from the very same hall, the Mariinsky’s current Artistic Director, Valery Gergiev, reveals only his second recording of Tchaikovsky’s ballet masterpiece. A perfectly judged realisation of one of classical music’s most cherished works.

Gergiev is an expert in Tchaikovsky’s music and his interpretations of 'The Nutcracker are among the most celebrated: "Gergiev takes us back to that first light of inspiration, and his orchestra plays as if guided by the composer’s own hand." The New York Times

Based upon E.T.A. Hoffmann’s tale of a young girl’s magical Christmas Eve, 'The Nutcracker' has become an essential part of festive celebrations the world over. Adored for pieces like 'The Dance of the Sugar Plum Fairy' and 'The Waltz of the Flowers', it contains some of Tchaikovsky’s most popular work and is perhaps the most famous ballet music ever written.

Closing the album is Tchaikovsky’s powerfully emotional Fourth Symphony. As the composer wrote, it is "patterned after Beethoven’s Fifth" and is well known for its theme of ‘fate’, announced by the ominous recurring fanfare that holds the unique symphonic form together. This coupling displays two very different sides of Tchaikovsky’s music, illustrating him as a complex man who battled to balance inner turmoils as well as utmost joy. Perhaps summed up by the final line of Tchaikovsky’s famous programme note:

"Reproach yourself and do not say that all the world is sad. Simple but strong joys do exist. Rejoice in other’s rejoicing. To live is still bearable."

Gergiev paints Tchaikovsky’s dream-world in the boldest colours…the Mariinsky Orchestra plays the score with theatrical verve and virtuosity, and the crystal-clear recording really brings out all the subtle inner details of Tchaikovsky’s orchestration

Unsurprisingly, the big moments are powerful: those arching phrases as the Nutcracker leads Clara off into the Land of Snow are glorious, as is the sumptuous pas de deux for the Sugar Plum Fairy and her Prince…a stocking-filler to suit the most ardent Tchaikovskians this Christmas

Now here is a glory, a double CD coupling Tchaikovsky’s Nutcracker ballet, as glamorous a musical chocolate box collection as you could hope for, and the mighty Fourth Symphony … The performance of Nutcracker is intoxicating in its beauty – all the magic and sparkle is there. I felt as though I had been sprinkled with stardust; it’s glossy and glittering and gorgeous.

you can tell this an orchestra that knows Nutcracker like no other.