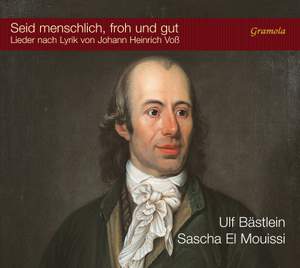 On this album bass-baritone Ulf Bästlein focusses on the German lyricist Johann Heinrich Voß. Voß until today is best known primarily for his translations into German of Greek and Roman classic literature like the epics by Homer. His own lyric oeuvre was taken on by many of his contemporaries and beyond and consequently set to music. The songs presented here by Ulf Bästlein and pianist Sascha El Mouissi were composed by the likes of Carl Loewe, C. Ph. E. Bach, Franz Schubert, Felix Mendelssohn, but also lesser known composers like Johann Abraham Peter Schulz, Franz Xaver Sterkel, Johann Rudolf Zumsteeg, Carl Friedrich Zelter and Johann Friedrich Reichardt.