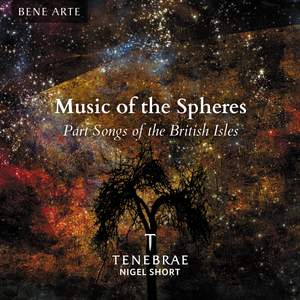 Part Songs of the British Isles

A spooky, flickering account of Elgar’s Owls underlines the ability of Short and his outstandingly responsive singers to create riveting atmosphere, and communicate to the listener the import... — BBC Music Magazine, Christmas 2016, 5 out of 5 stars More…

No. 1, There is Sweet Music

Chilcott: The Modern Man I Sing

No. 2, The Last Invocation

Internationally-renowned chamber choir Tenebrae return with a new collection of British part songs and choral works. As well as being a celebration of compositions by British composers, the disc also marks Shakespeare’s anniversary year with a selection of works based on his texts, including the much loved works by Vaughan Williams and a lesser-known set by Herbert Murrill. Perhaps the least recognisable composer name on this disc, Murrill (1909-1952) is one of a select group of composers who – through war or ill-health – died at a tragically young age and whose works were subsequently neglected during the second half of the century.

A spooky, flickering account of Elgar’s Owls underlines the ability of Short and his outstandingly responsive singers to create riveting atmosphere, and communicate to the listener the import and implications of a song’s narrative…[an] intelligently assembled, superbly sung collection

beautifully performed and recorded … Tenebrae’s youthful sound is not only irresistibly appealing but also extremely well suited to this very enjoyable programme. A fine achievement.

Tenebrae’s tone is set by the purity of their top line.