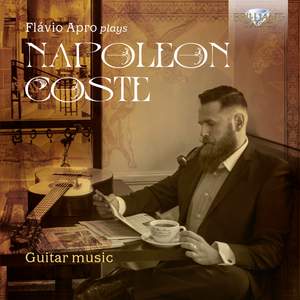 Napoleon Coste (1805-1883) was one of the most important and influential protagonists of the guitar in the 19th century. He was a prodigy, touring Europe in his early years giving highly successful concerts, publishing his own music, inventing new types of guitars and hybrid instruments such as the Heptacode and Decacorde, a musicologist and a highly respected teacher.

His most important oeuvre for the guitar are the “25 Etudes de Genre”, concert pieces composed over the whole period of his life, miniatures of great attraction, charm, melodic inventiveness and virtuosity. Also included is the Grande Sérénade Op. 30, a multi-movement concert piece to show off the player’s skills and sentiment.

Played with great conviction, technical command and apparent joy by the wonderful Flávio Apro, one of Brazil’s foremost guitarists, who already successfully recorded for Brilliant Classics: “Nocturne” (94875BR) and “The Brazilian Guitar” (94810BR).

The extensive catalogue of guitar music issued by Brilliant Classics already includes music by Napoléon Coste within an album of duets. He appeared (as he does on the album) in company with his teacher Fernando Sor in concert. Indeed after a prodigious start he became a Liszt of the guitar, appearing to acclaim around Europe until both a bad accident in 1863, and the decline of interest in the guitar in the latter half of the 19th century, robbed him of his performing career. Thus Coste turned to teaching, and in that capacity wrote the studies on this album which have never been recorded before as a complete entity.

They were not written as a set but during the last two decades of his life, and thus they reveal both the growth of Coste as a mature composer and musician, and his talent for incorporating romantic subtleties of harmony with the pedagogy of the instrument. The composer supplied a self-deprecating introduction: ‘modest productions (…) dedicated to talented amateur players and former students, whose memory is precious to the author’, but the Etudes are true concert pieces, amounting to a mini-treatise on Romantic harmony and musical forms used in Europe at the time.

Coste wrote the Etudes for a seven-stringed instrument; playing them on a six-stringed Classical guitar, Flávio Apro has devised his own innovative solutions, which further enhance Coste’s intended technical challenges. The Op.30 Serenade, however, dates from seven years before the abrupt end to the composer’s concert career and is thus more ebullient in tone: a throughcomposed, 10-minute work of impressionistic imitation which takes in both Spanish and French influences from operetta to Bolero before a grand finale.

This is Flávio Apro’s third album for Brilliant Classics, after the success of Nocturne and The Brazilian Guitar.