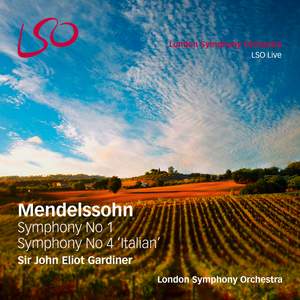 Gardiner keeps the LSO on its toes both in the C minor work and the Italian symphony, the winds producing crystal-clear articulation the hair-raisingly fast account of the latter’s concluding... — BBC Music Magazine, December 2016, 3 out of 5 stars More…

Recording of the Week,  John Eliot Gardiner conducts Mendelssohn symphonies with the LSO

James listens to John Eliot Gardiner's latest volume of Mendelssohn with the LSO.

Constantly in the vanguard of enlightened interpretation, Sir John Eliot Gardiner stands as a leader in today’s musical life. His award-winning Mendelssohn cycle on LSO Live showcases his period performance expertise; the LSO muscians standing to play, highlighting their individual musicianship. As Gardiner notes: "It gives a different type of dynamism and energy... it means that the fiddles are freer in the way that they attack the extremely virtuosic lines and it gives a tremendous sense of occasion to the music making."

Dramatic and harmonically adventurous, Mendelssohn’s Symphony No 1 is presented here in a unique format, with both the original and revised versions of the third movement. As Gardiner said when introducing the work in concert: "It’s not every evening that you get to hear a symphony by a 14-and-a-half-year-old genius and there’s an intriguing complication to this piece. When Mendelssohn came to London in 1829, he performed the symphony and he wrote back to his parents saying: “well, I looked over my symphony and, lord, the minuet bored me to tears! So what I did was to take the scherzo from my Octet and I added a few airy trumpets and it sounded lovely.” Well, actually he did an awful lot more than that; he re-orchestrated absolutely brilliantly. And it’s so good, we thought you should hear that version. But what about the minuet and trio? Why, when he came to publish the symphony did he use that version and leave out the scherzo? I happen to think they’re both really remarkable, as is the whole symphony, and perhaps you’d let us know which you prefer...?"

The Fourth Symphony is inspired by the sights, sounds and atmosphere of Italy and is among the best loved of all the composer’s works. Mendelssohn himself described it as: "the jolliest piece I’ve written so far." Symphony No 1 was broadcast across Europe on Mezzo TV, alongside Mendelssohn’s 'A Midsummer Night’s Dream', and this rich video content will be shared to support the release.

Gardiner keeps the LSO on its toes both in the C minor work and the Italian symphony, the winds producing crystal-clear articulation the hair-raisingly fast account of the latter’s concluding saltarello. He also effectively brings out the undercurrent of unease in the C minor work’s slow movement, and the final reprise of its theme is quite beautifully handled.

Gardiner’s real competition is with himself, and the Vienna Philharmonic. But the strings of the LSO display unrivalled agility...Taken at a true presto, the finale [of the Italian] never quite spins out of control but sounds as though it might at any moment. Outstanding.

Right from the off it's infectiously smile-inducing, with delicately chirping woodwind and rhythmically incisive contributions from the strings...Gardiner is a stickler for Mendelssohn's phrase markings...I’m sure it’s no coincidence that Gardiner’s experience with the music of JS Bach makes Mendelssohn’s own love of Bach more evident than usual.

Gardiner’s Mendelssohn is as genial as it gets.

the LSO [is] at its most immaculate with Sir John Eliot Gardiner, through his completely fresh view of the [First Symphony, pretty much re-inventing it…this is a glorious disc, along with a breathtakingly all’aperto performance of the Italian Symphony…the best you will hear