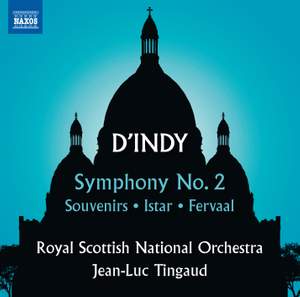 An honest and enjoyable interpretation. — BBC Music Magazine, Christmas 2016, 3 out of 5 stars More…

Vincent d’Indy is one of the most important yet neglected figures in French musical history. Though he was celebrated as a teacher, his eclectic yet inventive orchestral music has taken longer to secure him fame. The Symphony No.2 in B flat major has a powerful architectural design within which tensions between tradition and innovation are played out, and through which the composer draws on folk motifs and his religious faith alike. The powerful, grief-laden symphonic poem Souvenirs was dedicated to the memory of his late wife whilst Istar is a majestic series of variations. The Prelude to Fervaal, his first opera, reveals atmospheric Wagnerian writing.

An honest and enjoyable interpretation.

Both works are superbly done. The anguish of Souvenirs really hits home. Istar sounds very sensual and the RSNO have a field day with its virtuoso scoring, particularly the brass and woodwind, who are on fine form throughout

A generally attractive package of lovely music that deserves to be more widely known.

[Jean-Luc Tingaud] presides over a finely prepared account of this imposing work; indeed, his conception possesses impressive cogency, fiery purpose and intelligent observation…here, then, is a generously full, vividly engineered anthology which can be strongly recommended – and it won't break the bank either!