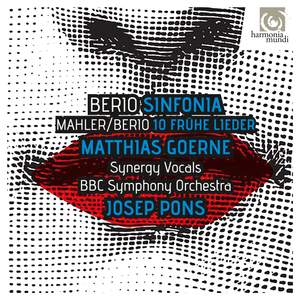 We have only to listen to [Berio’s] exquisite song orchestrations, graced with Goerne on riveting, vibrant form, to feel the depth of his empathy, an almost palpable longing to be absorbed into... — BBC Music Magazine, Christmas 2016, 5 out of 5 stars More…

James listens to a formidable account of Berio's Sinfonia with the BBC Symphony Orchestra and Synergy Vocals.

"Since it was first performed in 1969, Luciano Berio's Sinfonia has become a classic, certainly the most widely known of all his works and arguably the most successful concert piece by a composer of his generation." The Guardian

This release is dedicated to the pioneer of Italian modernism Luciano Berio. His 5-movement 'Sinfonia', is undoubtedly his most well-known work, written for the New York Philharmonic and dedicated to Leonard Bernstein. It has become one of the key works and principle musical manifestations of the 1960s bringing together collage technique and modernism.

A few years later, Berio went on to orchestrate a number of songs on texts from 'Des Knaben Wunderhorn', which Mahler had scored for piano and voice, as if they had been written at the time of the later 'Kindertotenlieder'. A symphonic backcloth tailor-made for the great baritone voice of Matthias Goerne [whose 'Knaben Wunderhorn' songs are already available on DVD, with Andris Nelsons, from Lucerne]. His warm, dark voice allows him to capture the sombre and tragic atmosphere of this music like no one else.

We have only to listen to [Berio’s] exquisite song orchestrations, graced with Goerne on riveting, vibrant form, to feel the depth of his empathy, an almost palpable longing to be absorbed into that lost Viennese world…this coupling is a must-have

Matthias Goerne projects each song with ursine power and humour, albeit in slightly frayed voice. His larger-than-life stage persona fits Berio’s vividly faithful arrangements…this new [recording] feels even truer to the spirit of '68 which inspired Sinfonia

any attempt to describe this [third] movement can't possibly do full justice to how extraordinary an accomplishment it is; it's much more than simply copying out some Mahler and throwing in a few other bits and pieces, and the overall effect in performance is remarkable, shifting from violent orchestral outbursts to some truly sublime moments.

Berio’s Sinfonia, premiered in 1968, remains an incomparably rich conundrum...On a disc such as this outstanding one, balance can be contrived so that the throng of words is audible to just the right degree.

Berio’s skilful arrangements invoke a similar soundworld as Mahler’s own orchestrations of his songs: it’s colourful, slightly brittle, and vividly pointed up by Pons...Goerne gives the vocal lines the slightly larger-than-life quality they need, exaggerating their expressive extremes and running through his full palette of baritonal shades.

Goerne summons a dark, curdled tone, which can switch in an instant to a delicate tenderness...Altogether, this disc is a wonderful introduction to one of the 20th century’s great composers.