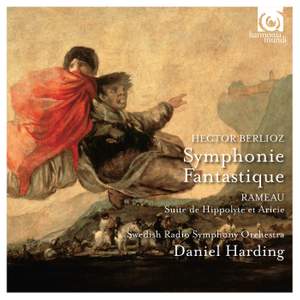 an arresting juxtaposition … Smart work from the uncredited harpsichordist and taut direction by Daniel Harding anchor the Swedish Radio Symphony Orchestra’s performance of the suite from Hippolyte... — BBC Music Magazine, December 2016, 4 out of 5 stars More…

A world might seem to divide the unbridled Romanticism of Berlioz from the highly controlled art of Rameau, standard-bearer of the French Late Baroque. And yet, at a distance of less than a century ('Hippolyte' was premiered in 1733, the 'Fantastique' in 1830), the same passion links two works more similar than their stylistic divergence might suggest. There is the same audacity in the orchestration, combined with an innate sense of drama that springs repeated rhythmic and harmonic surprises. The Swedish Radio Symphony Orchestra performs here a task requiring unusual versatility under their Music Director, Daniel Harding, establishing a dialogue between two very different pioneers.

Daniel Harding is also Principal Guest Conductor of the London Symphony Orchestra and Music Partner of the New Japan Philharmonic. He takes up the baton at the Orchestre de Paris -the first British maestro in the orchestra’s history - this September, 2016. He is Conductor Laureate of the Mahler Chamber Orchestra for life.

an arresting juxtaposition … Smart work from the uncredited harpsichordist and taut direction by Daniel Harding anchor the Swedish Radio Symphony Orchestra’s performance of the suite from Hippolyte et Aricie … With vibrato selectively applied, Harding’s Symphonie Fantastique rivals Philippe Herreweghe’s in its translucency, yet he has a Mahlerian quality, at once highly detailed and expansive.

I like the combination; the way it emphasises Rameau’s sense of colour and dramatic daring … an audacious coupling, I enjoyed it a lot, not just the idea but also the execution

vibrant, pointed, stylish Rameau…more massive than our ears are used to but still quick on its feet … Harding’s Berlioz is resilient, pliant, conducted with a temporal freedom that always seems ambitious but ends up feeling electrifyingly right … Turn from Harding to his current peers – perhaps even to Charles Munch or Igor Markevitch – and it’s like going from IMAX cinema to living-room black-and-white.

the key seems to lie in the really very surprising string tone that Harding draws from his Swedish orchestra in both works. They have an acidic edge in the Rameau, which reminds you of the period specialists, but Harding’s masterstroke is to carry this on into the Berlioz, creating an utterly distinctive soundworld for the Symphonie Fantastique … fascinating on both a musical and an intellectual level

Harding’s own Swedish Radio Symphony Orchestra are stylish in both. There’s some brazen playing to enjoy – the low brass in March to the Scaffold sound like a foghorn – but the impression of a lack of refinement is deceptive: the balance and pace are always tautly in check.

the performance is a cracker. The Swedes play with a passion, swagger and relish for the grotesque that makes a nonsense of national stereotypes, and Harding’s attention to detail is exemplary without impeding the music’s drama

The dances from Rameau’s Hippolyte et Aricie are sprightly in rhythm and crisp in articulation. The overall effect is one of highly sculpted music-making, though not without moments of impressive, full-bodied vehemence. The Berlioz is volatile, with Harding relishing the surprises that come from his refusal to smooth out rough edges.

This is my new favourite Symphonie Fantastique on modern instruments, and it should be yours too … Everything sounds superb (sample the church bell in the last movement), and Harding knits everything together with an impressive sureness of intent ... Enormous fun.