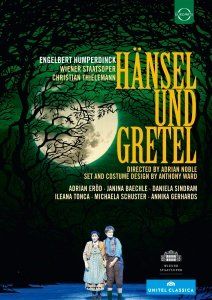 A notable success – clear-eyed and lovingly conducted…a fine production that will be especially enjoyed by those who recoil from kitsch — Gramophone Magazine, February 2017

Based on one of the best-loved stories by the Brothers Grimm, Hänsel und Gretel soon became one of the most-performed operas in the world and has remained enduringly popular with both children and adults ever since.This is the first production at the Wiener Staatsoper since World War II – inventively staged by Adrian Noble, former Artistic Director of Britain’s Royal Shakespeare Company.