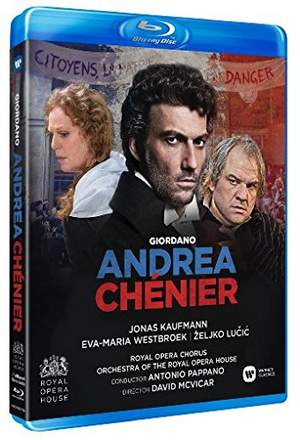 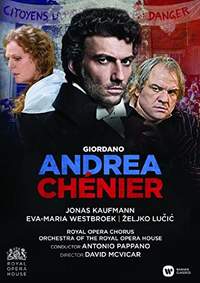 Presented in its Covent Garden premiere in January 2015, this staging – directed by David McVicar and conducted by the Royal Opera’s Music Director, Sir Antonio Pappano – shows a bloody tricolour daubed with the words “Even Plato banned poets from his Republic” – written by Robespierre on the death warrant of the historical Chénier, a poet and journalist sent to the guillotine in 1794 for criticising France’s post-revolutionary government. Andrea Chénier was a great success at its premiere at La Scala, Milan, on 28 March 1896. It established Giordano as a leading member of Italy’s giovane scuola, and has remained Giordano’s most popular opera, with occasional productions at leading opera houses. This production is the first by The Royal Opera since 1984. Of Giordano’s later operas, only Fedora (1898) has attracted some continued interest.

The Countess de Coigny in sumptuous purple satin is sung to great effect by Rosalind Plowright, as is Elena Zilio’s Madelon…never less than compelling on screen, Jonas Kaufmann is a perfect foil to Eva-Maria Westbroek’s Maddalena who wrings every last drop of emotion out of ‘La mamma morta’…but the man of the hour is Antonio Pappano who conducts the Orchestra of the Royal Opera House as if all their lives depended on it

Captivating from start to finish, Giordano’s flawed masterpiece Andrea Chenier is presented in a sterling production under director David McVicar...Kaufmann’s voice is in superb condition, expressive and compellingly projected in his arias...[Westbroek's] voice is a substantial instrument which she manages capably, as demonstrated by her Act Three showpiece aria La mamma morta.

An introduction to Andrea Chénier