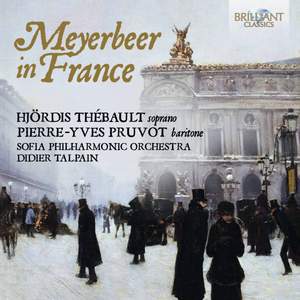 Renowned in his lifetime, Giacomo Meyerbeer – born Jakob Liebmann Meyer Beer – was one of the first opera composers to truly establish himself as master of the genre. His fame was at a height in the mid-19th century, as he managed to produce hit after hit in the grand opéra style. Like his contemporary Halévy, he was one of the first truly successful Jewish composers, at a time when Jews’ roles in society were changing fast; many of his operas, therefore, explore themes of societal exclusion and otherness. These include Robert le Diable, in which the eponymous Robert is the son of the Devil, the spectacular Les Huguenots, which depicts the 1572 massacre of French Huguenots at the hands of the ruling Catholics, and Le Prophète, featuring the sinister Anabaptist sect. Although Meyerbeer takes on big themes – good versus evil, the clash of large political forces – his true compositional strength lies in his masterful portrayal of the characters’ emotional anguish and joy, as the audience mourns and celebrates with them throughout.

This release features some of the best-known arias from Meyerbeer’s French operas, when he was at the height of his creative output. Isabelle’s torment at Robert’s diabolical behaviour in Robert le Diable, as the protagonist turns to witchcraft and eschews his worldly power, is beautifully depicted in the sweet and soothing melody line, as Isabelle seems to weave a spell over the tormented man. Act Four of Les Huguenots contains a beautiful recitative and aria for soprano, ‘Je suis seule chez moi’, and was first sung by Cornélie Falcon. Her dramatic, exceptionally powerful voice was renowned in her lifetime, and led to the term ‘falcon soprano’ – now the established tone for sopranos taking on Meyerbeer’s arias.

Certainly, none of the artists on this album disappoint. Experienced French singers Hjördis Thébault and Pierre‐Yves Pruvot – who between them have performed in opera houses around the world – are brilliantly supported by the Sofia Philharmonic Orchestra, conducted by Didier Talpain, a dedicated champion of French opera who has previously staged works by Meyerbeer, Bizet and Saint‐Saëns.

Recorded in Sofia, Bulgaria in June 2013.