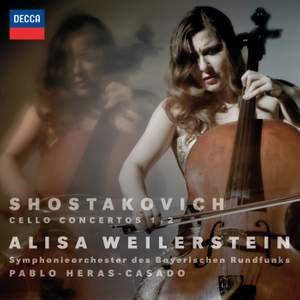 Shostakovich’s two cello concertos present such different challenges, it’s a rare cellist who shines as brightly in both. Alisa Weilerstein is well-matched to the First Concerto: fierce, tight... — BBC Music Magazine, Christmas 2016, 4 out of 5 stars More…

It was in Shostakovich’s First Cello Concerto that ‘cellist Alisa Weilerstein prompted the Los Angeles Times to marvel: “Weilerstein’s cello is her id... She and the cello seem simply to be one and the same.”

Composed for the virtuosic cellist Mstislav Rostropovich, the coupling and contrasting of these two arresting works is irresistible: the anti-heroic, relentless, emotionally suppressed First Concerto set alongside the sarcasm and isolation of the Second.

Weilerstein’s interpretation is underpinned by her meeting Rostropovich –a close friend of the composer – when she was 22, playing Shostakovich for him and absorbing his advice and wisdom.

Her outstanding rapport with conductor Pablo Heras-Casado and the Symphonieorchester Bayerischen Rundfunks is evident in this new recording.

Shostakovich’s two cello concertos present such different challenges, it’s a rare cellist who shines as brightly in both. Alisa Weilerstein is well-matched to the First Concerto: fierce, tight and articulate, this account fairly crackles…Pablo Heras-Casado and his forces create chamber-like episodes of luminous intimacy

Weilerstein responds with playing that puts a premium on subtlety and inner intensity. What we have here is not a typically spontaneous Rostropovich bearhug, more a deeply considered embrace.

The playing is extremely accomplished…I do like the nagging insistence of the opening, and the Bavarian hornist is tonally one of the fullest and steadiest I have heard…brave to the Bavarian horns for their Janaceky whoopings around the nine-minute mark, and to Decca’s engineering for capturing such moments, and many others, in such ravishing detail

Weilerstein follows outstanding Decca recordings of the Elgar and Dvorak concertos with this pairing, which illustrates her depth and range...Heras-Casado and the Bavarians match the sardonic bite of her playing: this is one of the best accounts ever recorded of a work we don’t hear often enough in concert.