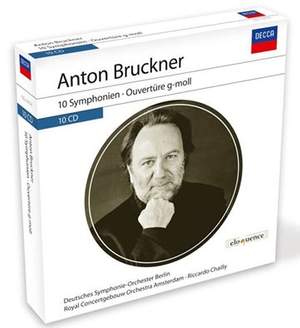 “Amoung the composers I conduct, Bruckner is one of the top five I would not give up for anything.” RICCARDO CHAILLY

“The combination of the Concertgebouw and Decca’s engineering is a beguiling one and the present production is a characteristic success.” GRAMOPHONE

This 10 CD set, recorded between 1985 and 2002, presents all ten Bruckner Symphonies, including the rarely-heard “Die Nullte” (Symphony No. 0) and the Overture in G minor. Chailly uses the lesser-known and lesser-recorded Nowak editions of four of the symphonies.

Recorded in classic Decca Sound at the Concertgebouw, Amsterdam, and at Jesus-Christus-Kirche, Berlin, these recordings capture the world-renowned sound of the Royal Concertgebouw and Berlin Symphony orchestras.

Riccardo Chailly is an elder statesman among today’s conductors, although it is probably an epithet he would reject. His love of Bruckner has been evident throughout his long, hugely-successful career. He remains in the strongest demand in concert hall and opera houses across the world.