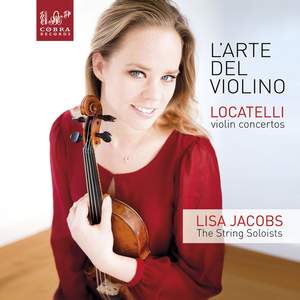 While recognizing the first set of compositions designed to truly extend and test the technical limits of the violin, the 24 Caprices of Niccolo Paganini spring almost immediately to mind. It is interesting then to realize that almost half a century before Paganini was even born, the Italian composer and virtuoso Pietro Antonio Locatelli could be found pushing the boundaries of violin playing to its limits with his concertos Opus 3: L’Arte del Violino.

In his music, Locatelli pushes the boundaries of the violin technique with an unprecedented virtuoso and at times romantic vision. The frequent use of exceptional high positions on the violin, many daredevil antics in the left hand including double stops and extended stretches, and the exploration of hitherto rarely used bow techniques, makes him a true pioneer for the violin and the development of violin technique in general.

Despite his obvious fascination for virtuosity, Locatelli ensures that one is captivated first and foremost by charming original melodies and bold characterization. His music never develops into a tour de force but remains sympathetic to both the listener and the performer.

With his L’Arte del Violino, consisting of 12 Concerti and including 24 virtuoso Capricci for unaccompanied violin, Locatelli simply stunned the musical world. These works were innovative in almost every conceivable way. Even the structure of the concertos is atypical; Locatelli abandoned the traditional three-movement form and included two caprices in every concerto. From a technical point of view, these concertos stretch the range of the violin to its absolute limit through the use of unusually high positions, finger dexterity and demanding bow techniques that were simply unheard of before this time.