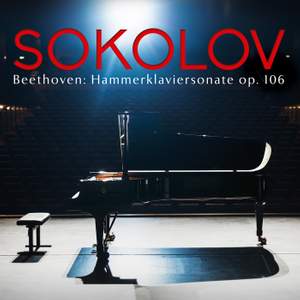 Sokolov’s voicing of textures throughout the sonata is a marvel in itself…there is certainly a massive self-belief and artistic presence here — Gramophone Magazine, October 2016 More…

Grigory Sokolov has gained an almost mythical status amongst music-lovers and pianophiles throughout the world. He is considered by many today to be the world's greatest living pianist. Ever since his first recital in Leningrad. He has amazed everyone again and again with the enormous breadth of his repertoire and his huge, almost physical musical strength. Grigory Sokolov was largely unknown in the West, however, until the late 1980's, but is now rightfully regarded as a giant of the piano. Sokolov's concerts are anticipated with eagerness where ever he travels. He's not been outside of Europe for several years now, preferring to tour Europe. His programmes change twice a year, Sokolov mining the music he plays for every jewel before he feels ready to consider a new work. Sokolov prefers his CD's to be recorded live is not surprising, since he likes to capture the sacred moments of a real, live concert and avoid the sterile atmosphere of a studio. Ludwig van Beethoven's Piano Sonata No. 29 in B-flat major, Op. 106 (known as the Große Sonate für das Hammerklavier, or more simply as the Hammerklavier) is a piano sonata widely viewed as one of the most important works of the composer's third period and among the greatest piano sonatas. Completed in 1818, it is often considered to be Beethoven's most technically challenging piano composition and one of the most demanding solo works in the classical piano repertoire.

by the final fugue, Sokolov is in overdrive, achieving a dazzling mixture of utter clarity and profound expression through the tortuous writing.