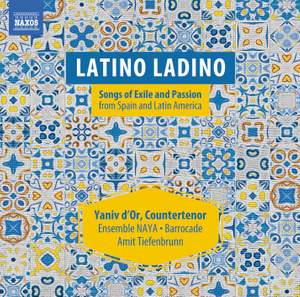 Songs of Exile and Passion from Spain and Latin America

Performed with panache by the countertenor and the period group he founded, Ensemble Naya. — BBC Music Magazine, December 2016, 4 out of 5 stars More…

The music and poetry of numerous persecuted and exiled minority cultures flourished throughout the Mediterranean and South America during the 17th century, the sensitivities of these displaced communities retaining powerful resonance today. These ancient narratives on beauty, love, joy and sorrow are expressed through Yaniv d’Or’s haunting voice against a ‘folk-Baroque’ instrumental backdrop that reinvents enchanting and distinctive musical worlds.

Yaniv d’Or’s unique countertenor voice has made him one of the rising stars of the modern international music scene. British-Israeli d’Or studied at the Guildhall School of Music and Drama, receiving the International Vocal Art Institution Prize and the Gottesman Award. In concert he has performed at the Mariinsky Theatre, Barbican Hall, Queen Elizabeth Hall, Dome des Invalides, Lincoln Centre, Oslo Opera House, Mann Theatre and Caesarea Amphitheatre. He has appeared in recital at Château de Versailles and regularly appears at Wigmore Hall. A prolific recording artist, Yaniv d’Or is the recipient of the Gottesman Award for his album Liquefacta est… with Ensemble NAYA.

Performed with panache by the countertenor and the period group he founded, Ensemble Naya.

Yaniv d’Or’s choice of repertoire is consistently enterprising and thought-provoking.

Overall, the playing combines folk energy with baroque precision, and D’Or is a characterful singer, even if his tone, swinging between fruitiness and crooning, won’t be to all tastes. Even the most yearning laments are often couched in stamping flamenco-like rhythms, and it’s not all gloom.