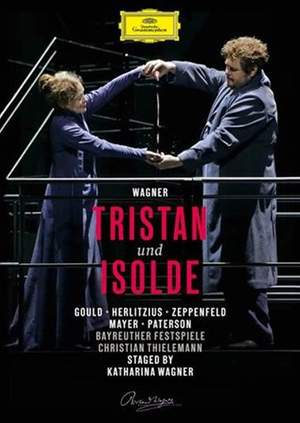 Katharina Wagner now gets a novel focus on Tristan und Isolde by stripping the work, its characters and its settings almost entirely of Romantic illusions and pretensions...The concentrated acting... — Gramophone Magazine, September 2016 More…

An important and highly-anticipated new production of Wagner's take on this ultimate, immortal tale of love and longing by the composer's great-granddaughter Katharina Wagner. Featuring some of today's most prominent vocalists and Christian Thielemann, arguably the most important Wagner conductor of our day and age

This is the first installment of an exclusive, multiyear partnership between Deutsche Grammophon and the Bayreuth Festival, in which the Yellow Label becomes the exclusive audiovisual partner of the mythical Wagner festival, releasing each edition's new production on DVD/Blu-ray.

In celebration of the 150th anniversary of Tristan & Isolde this production was premiered on 25 July 2015 and marked the high-point of last year’s Bayreuth Festival.

Katharina Wagner now gets a novel focus on Tristan und Isolde by stripping the work, its characters and its settings almost entirely of Romantic illusions and pretensions...The concentrated acting performances are closely supported by Christian Thielemann’s approach...This is an important and compelling addition to the number of worthwhile interventionist Bayreuth productions.

Evelyn Herlitzius is a credible and finely acted Isolde…she is clearly a Wagnerian soprano of the first rank. As Brangäne Christa Meyer is a joy. The Bayreuth orchestra plays gloriously, and Christian Thielemann controls the ebb and flow of dramatic tension with a superb sense of pace and proportion.