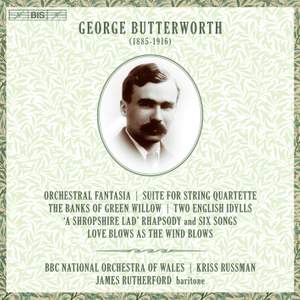 No. 1. Loveliest of trees

No. 5. The lads in their hundreds

No. 1. In the year that's come and gone, love, his flying feather

No. 2. Life in her Creaking Shoes

When George Butterworth joined the army in 1914, his most recent works included the song cycle Six Songs from 'A Shropshire Lad' as well as the Rhapsody 'A Shropshire Lad', which he called 'an orchestral epilogue' to his settings of A. E. Housman's poems. The Rhapsody has since been described as 'one of the greatest of all English orchestral works' and when Butterworth left England to fight in the First World War, he was seen as one of the bright hopes of British music a hope that in August 1916 was extinguished in the trenches at the Somme. When Butterworth joined up he stopped composing and also destroyed several manuscripts that he felt were inferior. An exception was an Orchestral Fantasia which he had started just before the war broke out: a 92-bar full score manuscript lasting some three-and-a-half minutes has been preserved. On the first page Butterworth wrote 'see short score' which implies that the work may have been completed but if so, the score in question has been lost. The composer and conductor Kriss Russman has therefore taken up where the manuscript breaks off, adding some 5 minutes of music through a process which he describes in his liner notes as 'developing Butterworth's original ideas and combining them with additional material derived from an analysis of his other music'. Performed by the BBC National Orchestra of Wales under Russman himself, the world première recording of the Fantasia closes the present disc which also includes some of Butterworth's best loved pieces, such as The Banks of Green Willow. Russman has also made orchestral arrangements of the five-movement Suite for String Quartette and the Six Songs from 'A Shropshire Lad', both of which are recorded here for the first time. The soloist in the song cycle, and in the three songs that make up Love Blows as the Wind Blows, is James Rutherford.

It’s impossible not to sympathise with Russman’s motives, and his accounts of Butterworth’s four completed orchestral works are fresh and passionate, with a wide dynamic range captured in crystal-clear BIS sound. And Rutherford gives an ardent reading of [Love Blows as the Wind Blows]. Butterworth’s admirers will want to hear this disc

A very fine collection of well-known and lesser-known works by one of Britain's most promising composers.

This is a beautiful look at the all too exiguous oeuvre of a composer killed at the Somme aged 31...Russman’s completion of the 1914 Orchestral Fantasia fragment is impressive.