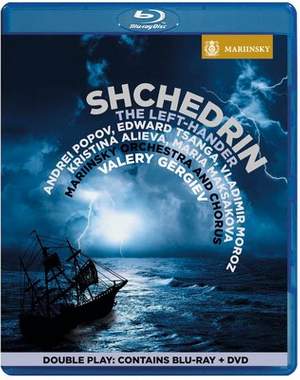 Specially written for Gergiev on the occasion of his 60th birthday, Rodion Shchedrin’s 'The Left-Hander' is a comedy of Russians and Englishmen, new technology, old traditions and strong drink. The premiere was given by the Mariinsky Opera in St Petersburg in July 2013.

Rodion Shchedrin is one of music’s greatest living humourists and his work is laced with pitch-black irony and deadpan wit. Based on Nikolai Leskov’s classical satirical novella of 1881, 'The Tale of Cross-Eyed Lefty From Tula and the Steel Flea', 'The Left-Hander' is a gloriously wry exploration of Russia’s relationship with the West in general and England in particular. The work recently received its UK premiere and was met with great acclaim.

It fizzes with energy … I enjoyed this hugely.

Andrei Popov gives way to joy in the title role, passing by all states, excitement to dejection. The Flea is a small mechanical doll alla Offenbach, a light coloratura of course, much applauded after her numbers...the beautiful lyric soprano Maria Maksakova as Princess Charlotte deserved much applause.

Gergiev conducts a sharp performance, one fully alert to the satires that enmesh the work.

The SACD recording is very fine, the booklet impeccably presented. If you love opera and are attracted by the Russian traditions of surrealism and dark humour, then this is an extremely fertile place to plant your flag.

All in all, a useful addition to the catalogue, if maybe not a sure-fire hit.

Shchedrin parses and sets the text very cleverly, with lively and often humorous orchestration, folkish when needed… Levsha is definitely an ensemble piece best suited to a company like the Mariinsky, with its expert chorus and strongly enacted minor parts.