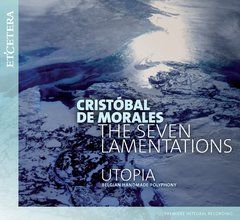 Utopia have a [low] centre of gravity yet maintain similar clarity while simultaneously warming the texture with soft Flemish-tinged vowel sounds. The results are beautiful, intimate and thoroughly... — Gramophone Magazine, October 2016 More…

The Lamentations from the Old Testament date back to the 6th century BC, to the sack of Jerusalem by Nebuchadnezzar II, King of Babylon — on whose character Verdi was to base his opera Nabucco. The Lamentations have generally although possibly erroneously been attributed to the prophet Jeremiah. Their deeply expressive character has ensured that they have been set to music by many different composers, ranging in style from various monodic Gregorian settings to fully polyphonic compositions. These deeply moving works were performed each year during the Triduum sacrum, the three-day period of Maundy Thursday, Good Friday and Easter Saturday. Three lectiones were sung during Matins on each of these days, making nine in total. The verses of each lamentation generally begin with a lengthy melisma of mourning set to one letter of the 22-character Hebrew alphabet, creating a type of alphabetic acrostic. These lamentations consist of a limited selections of verses from five lengthy chapters, each of which contained either 22 or 66 verses. Each lamentation ends with the moving refrain Jerusalem, Jerusalem convertere ad Dominum Deum tuum (Jerusalem, turn again to the Lord your God), although these words were not written neither by Jeremiah nor any of his contemporaries. The city of Jerusalem is addressed as a lonely widow, one who has lost everything, her husband and children included.

Utopia was founded in 2015. This nascent ensemble blends the voices of 5 Belgian vocalists: Griet De Geyter, Bart Uvyn, Adriaan De Koster, Lieven Termont and Bart Vandeweghe. Over the course of many years, each of these singers have had the pleasure of working with the finest conductors and ensembles in early music: Herreweghe, Paul Dombrecht, Jos Van Veldhoven, and Huelgas Ensemble and Capilla Flamenca. From the start, Utopia has been active on the concert podium with bookings at the Early Music Festival in Warschau and various concerts at the Festival van Vlaanderen in Mechelen. In 2016 Utopia will tour Flanders and the Netherlands with 12 concerts and 3 different programmes. In Antwerp Utopia will be ensemble in residence of the magnificent St. Paul church. The church will not only host regular concerts, but also open its doors for anyone passing by during rehearsals. Utopia’s first CD release is scheduled for April 2016 on Et’cetera Records, featuring the 7 Lamentations of De Morales; a work that has not seen an integral recording for CD before. It is Utopia’s ambition to acquire a secure status in the Early Music scene.

Utopia have a [low] centre of gravity yet maintain similar clarity while simultaneously warming the texture with soft Flemish-tinged vowel sounds. The results are beautiful, intimate and thoroughly engaging