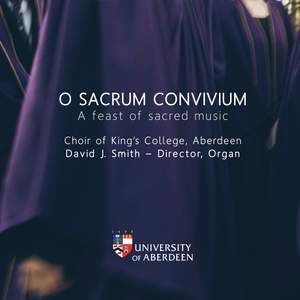 A feast of sacred music

Purcell: Music for the Funeral of Queen Mary: Thou knowest, Lord

Stainer: God so loved the world

The University of Aberdeen is delighted to launch its very own record label: Vox Regis.

The first CD features the Choir of King's College, Aberdeen which has become renowned for its exceptional interpretations of choral repertoire, from plainchant and early polyphony to new works specially written for them. The choir's regular services form an integral part of university life.

Further afield, recent tours have included an invitation to return to Budapest after an earlier tour which was particularly well received, and a week in residence at Canterbury Cathedral. As well as live appearances, the Choir has broadcast on national radio and television.

The first CD to be released by Vox Regis, O Sacrum Convivium, combines world-premiere recordings of new music with familiar favourites. New music from the 'Aberdeen School' of choral composition is placed at the beginning and end of the disc, including motets by Phillip Cooke written for the Choir, and music by Paul Mealor. This is interspersed with more established choral works, including 16th-century polyphony and music by Purcell and Stainer, as well as organ music by J.S. Bach played on the chapel's wonderful 2004 organ by Bernard Aubertin, an instrument of international distinction.

The programme has been devised by the Choir's Director, David J. Smith, who has an illustrious reputation both as a choral director and as a versatile organist, harpsichordist, recorder player and accompanist.

Proceeds from the sale of Vox Regis CDs will support vital research led by Professor Alison Murray at the University of Aberdeen into prevention and early diagnosis of diseases that cause dementia.