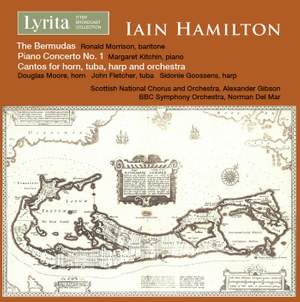 The Bermudas, Op. 33: Upon the Eight and Twentieth of July. Maestoso - Allegro con brio

The Bermudas, Op. 33: Where the Remote Bermuda Rides. Con brio

Hamilton, I: Piano Concerto No. 1

Iain Ellis Hamilton was born in Glasgow on 6 June 1922. When he was seven years old, his family moved to London and he was educated at Mill Hill School. He won a scholarship to the Royal Academy of Music in 1947 and henceforth dedicated himself to a life of composition.

The three works presented here are indicative of the broad spectrum covered by Iain Hamilton’s output. Together with Peter Racine Fricker and Humphrey Searle, he was one of the first British composers to forge a reputation in the immediate post-war years. It is to be hoped this release will introduce new listeners to his individual, resilient and multifaceted musical voice.