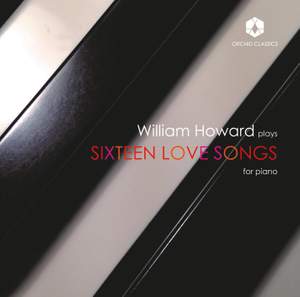 Smetana: Bagatelles and Impromptus for piano (8)

No. 36 in B-Flat Major: Andante amoroso

David talks to the pianist about his new album of love-songs and Lieder transcriptions for piano.

This new album features 16 19th & 20th century songs without words, many of which are known to us through use in film and popular song.

Sixteen Love Songs forms part of a project designed to explore contemporary realisations of the love song genre. William has also commissioned a collection of 16 new love songs to act as responses to those on the album.

A founding member of the Schubert Ensemble of London William is well known as a solo pianist. Previous solo recordings have won a Gramophone Critics’ Choice, a Diapason D’Or and a double fivestar review in BBC Music Magazine.