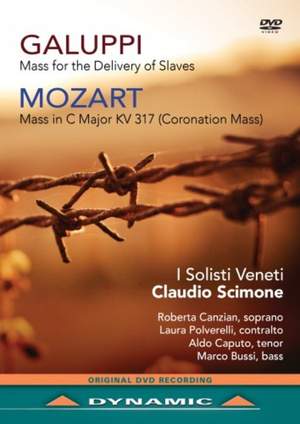 Galuppi: Mass for the Delivery of Slaves & Mozart: Coronation Mass

Galuppi: Mass for the Delivery of Slaves

Galuppi's Mass for the Delivery of Slaves was written in 1765 for the choir of St Mark's Basilica in Venice, where the composer had recently been appointed music director. Written for soprano and alto solos, choir and orchestra, the Mass displays Galuppi's extraordinary (and previously largely unrecognised) contrapuntal mastery. Arguably, Galuppi's full talent as a composer is revealed more in his sacred works than those for the theatre. This is the world première recording of the work.

Mozart's Mass in C major, KV317, composed in 1779, needs little by way of introduction. The masterpiece here receives a fine interpretation by the Solisti Veneti conducted by Claudio Scimone.

Filmed in May 2014 in the beautiful setting of the Eremitani Church in Padua.