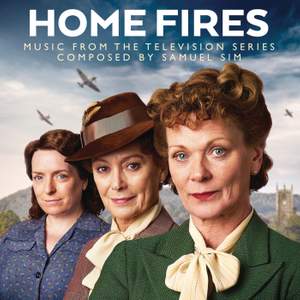 Music From The Television Series

Sim: All I Have

Sim: I Need This

Sim: Look After Me

MUSIC FROM THE TELEVISION SERIES, COMPOSED BY SAMUEL SIM - Based on Jambusters: The Story of the Women's Institute in the Second World War by best-selling author Julie Summers, Home Fires follows the exploits of a group of inspirational women in a rural Cheshire community. SAMUEL SIM is widely considered to be one of the most exceptional musical talents of his generation. Early in his career, Samuel quickly stood out from the crowd with his award winning score for the BBC’s Dunkirk, followed by him composing for the Hollywood feature film Awake for the Weinstein Company. He went on to write the score for the Emmy and BAFTA Award winning House of Saddam. Rare middle-eastern voices and instruments and dark, intense electronica were masterfully mixed with a full classical string orchestra. Described by one critic as: “superbly pitched somewhere between Stravinsky and The Chemical Brothers…” With a modern choral sound, the show’s title music, ‘Siren (Theme from “Home Fires”), won the Royal Television Society Award 2015 for ‘Best Original Title Music’ and has been specially arranged for this soundtrack album by Samuel Sim into a new 4 minute version.