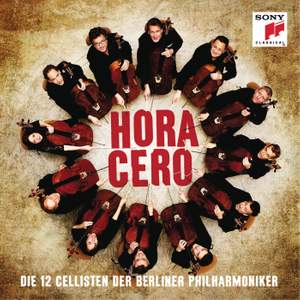 A spectacular demonstration of the sounds and colours that 12 cellos can produce in the hands of players of this calibre. From whistling harmonics to rhythms tapped out on the wood of the instruments,... — Gramophone Magazine, August 2016 More…

The world's best known classical cello ensemble's new CD after 6 years - with Tangos from Piazzolla, Salgan and others. They are unique. Naturally, every symphony orchestra has its cello section. But nowhere else in the world have the deeper, larger strings joined together to form an independent ensemble - an orchestra within an orchestra - meeting with success after success. That is why every music lover knows immediately where the "12 Cellists" come from, even if they cannot name their orchestra. They are an institution. They are the only ensemble formed from the orchestra that is actually officially allowed to use "of the Berlin Philharmonic" in their name. They have played together since 1972, appearing as an ensemble, occasionally in Berlin, often elsewhere, and quite often traveling great distances. "Hora Cero" (Spanish for "zero hour") is the ensemble's first album after their last release 6 years ago and named after Piazzolla's "Buenos Aires Hora Cero" which is also on the album. It features Tangos that were specifically arranged for them. In fact most of the arrangements.

A spectacular demonstration of the sounds and colours that 12 cellos can produce in the hands of players of this calibre. From whistling harmonics to rhythms tapped out on the wood of the instruments, there’s hardly a technique that isn’t deployed…it’s all done with love, rhythmic flair and stellar virtuosity