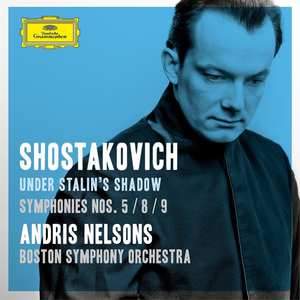 Nelsons is spry and precisioned and his insistence on super-keen rhythm pays off big-time...The Fifth Symphony is quite marvellous...and like the Tenth should dominate the catalogue for a long... — Gramophone Magazine, August 2016 More…

Andris Nelsons is the Music Director of the Boston Symphony Orchestra and in fall 2015 he was announced as Gewandhauskapellmeister of the Gewandhausorchester Leipzig, commencing in the 2017/18 season. With both appointments, and in leading a pioneering alliance between these two esteemed institutions, Andris Nelsons is firmly underlined as one of the most renowned and innovative conductors on the international scene today.

Andris Nelsons even though he is only in his mid 30ies has had a long journey with Shostakovich. He is one of the last conductors of his generation who still grew up in the Russian and, more especially, the Soviet musical tradition ever since he started his training as a conductor. He studied in St Petersburg with Alexander Titov and also with Mariss Jansons. His new orchestra has had a great tradition in performing many of Shostakovich’s works in America for the first time.

This recording provides a kaleidoscope of Shostakovich’s struggle with historical events and political pressures. The pre-war eclectic but accessible and popular 5th, in which he would seem to bow to political pressure, ensured his temporary rehabilitation. The beautiful but dark and gloomy mid-war 8th provoked yet again his fall from favour and instead of providing the political authorities with a triumphant post-war 9th Symphony, Shostakovich wrote a light Haydnesque work which would not be performed until after Stalin’s death. Selections from the Hamlet Suite, possibly Shostakovich’s best film score, rounds out this 2 CD set.

Nelsons is spry and precisioned and his insistence on super-keen rhythm pays off big-time...The Fifth Symphony is quite marvellous...and like the Tenth should dominate the catalogue for a long time to come...To say that it brings the house down is something of an understatement.

what for me makes this performance [of No. 9] interesting is how Nelsons takes care to temper any potential frivolity by bringing out the shade as well as the light...Having said that, there's no shortage of blithesome gusto in the third movement...[in the Fifth] Nelsons removes any crudeness to make them smoother and more rounded. It's fascinating to hear how this changes the mood from the usual one of open terror to something more quietly unsettling.

The young Latvian conductor is as effective in projecting Shostakovich’s sardonic black humour — the antimilitaristic episodes of the Eighth come across with terrifying irony — as he is in evoking his dark emotional inner world...Great performances from a conductor and orchestra at the top of their game.