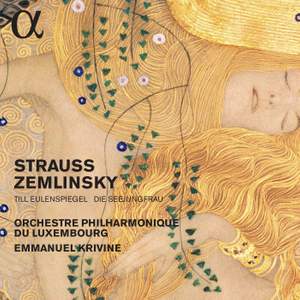 Krivine's approach to [Zemlinsky's The Mermaid] is emotionally compelling…[with] fluidity of nuance and urgency…this is particularly noticeable in the very few surging orchestral climaxes where... — BBC Music Magazine, September 2016, 4 out of 5 stars More…

In this new recording devoted to the symphonic poem, Emmanuel Krivine and the Luxembourg Philharmonic Orchestra couple two of the finest composers in the genre, Alexander von Zemlinsky and Richard Strauss. Die Seejungfrau follows the narrative of Andersen’s tale The Little Mermaid: the realm of the Mer-king, the storm and the Prince’s fall into the waters and rescue by the Little Mermaid; her transformation into a woman by the Sea Witch; the Prince’s admission that he does not love her and marriage to another woman; the Mermaid’s death. It is said that this work was Zemlinsky’s way of exorcising his grief after Alma Schindler, with whom he was madly in love, decided to marry Gustav Mahler. Richard Strauss may be said to have taken the style of the symphonic poem to its peak. Till Eulenspiegel’s Merry Pranks, which revives the world of a character from north German literature – a vagrant trickster who supposedly lived in the Middle Ages – transcends the genre with its orchestral and melodic verve and a constant renewal of the form itself. This supremely virtuosic, Romantic score, a sarcastic work that mocks bourgeois conventions, set the seal on the composer’s international success.

[The Zemlinsky] contains some wonderful music and is full of gentle yearning and delicious fin de siècle ripeness and Weltschmerz. And Krivine clearly loves it, bringing ardency to the Gurrelieder-like love music