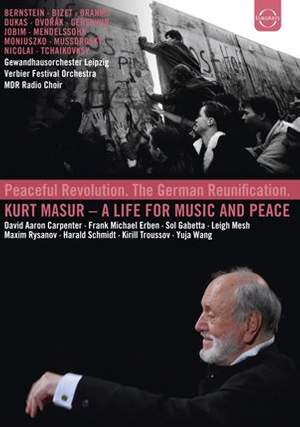 Kurt Masur – A Life for Music and Peace

Gershwin: Oh, I can't sit down (from Porgy and Bess)

Jobim: The Girl from Ipanema

This extensive DVD Box is dedicated to Maestro Kurt Masur, most famous not only as one of the greatest conductors but also for his significant role during the peaceful revolution in Germany and the fall of the wall in 1989.

Kurt Masur conducted the famous Gewandhausorchester in Leipzig for many years, later he became also Chief Conductor of the New York Philharmonic.

This DVD Box not only contains extraordinary concerts from The Gewandhaus and Verbier Festival, but also two documentaries about his role in the Peaceful Revolution, for the first time on DVD.