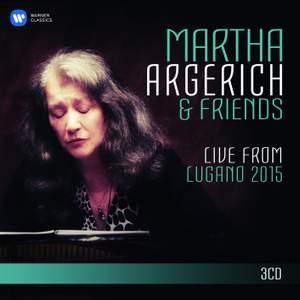 III. She Took The Path

“Few other musicians spark such adoration among peers and juniors alike as does Martha Argerich,” wrote the British magazine Pianist. The reasons for this adoration are richly in evidence at the annual Progetto Martha Argerich, part of the Lugano Festival in Switzerland.

The 15th edition of the Progetto takes place in June 2016, shortly after Argerich’s 75th birthday – it is hard to believe that 51 years have passed since she triumphed at the seventh International Chopin Competition in Warsaw, where one of the judges (Eugene List) described her as “volcanic … one of nature’s happenings”. Argerich remains a phenomenon, both as a supreme pianist and as a dynamic, much-loved mentor to young musicians. This 3-CD set, recorded in June 2015 and the twelfth Argerich-Lugano release in the Warner Classics catalogue, once again portrays her in both roles.

One of Argerich’s great joys is communal music-making. She has not given a solo recital since 1978, preferring the less lonely pursuits of concertos, chamber music and repertoire for piano duo. Each year in Lugano, she is joined by other eminent musicians, by young artists who have become her protégés, and by former protégés who are now making significant careers. A dazzling variety of music-making ensues as they explore smaller-scale repertoire and works with orchestra.

In 2015, the Progetto Martha Argerich comprised 15 chamber concerts and recitals and two concerts with symphony orchestra. Argerich herself teamed up with other pianists for four works: with her long-time sparring partner Stephen Kovacevich for Debussy’s En blanc et noir; with Lilya Zilberstein for Debussy’s arrangement of Schumann’s Kanonische Studien; with Alexander Mogilevsky for Schubert’s 8 Variations on an Original Theme for piano, D 813, and with Eduardo Hubert (born, like Argerich, in Buenos Aires) for a work by a fellow Argentinian, Luis Bacalov (b.1933), winner of an Academy Award in 1996 for his score for the film Il postino. His 11-movement suite Porteña, performed with the Orchestra della Svizzera italiana under Alexander Vedernikov, is filled with evocations of Argentina’s multicultural capital city. Shifting to the culture of Central Europe, the young Swiss-born violinist Géza Hosszu-Legocky joins Argerich for Bartók’s Romanian Dances, arranged by Zoltán Székely.

Among the celebrated musicians who also feature on the CDs are pianists Nicholas Angelich and Sergio Tiempo, cellist Gautier Capuçon, violinist Ilya Gringolts, clarinettist Paul Meyer and the members of the Margulis Family Trio (pianist Jura, violinist Alissa and cellist Natalia). The rising talents include violinists Mayu Kishima and Andrey Baranov, while other composers in the eclectic repertoire on the CDs are Brahms, Ries, Turina, Poulenc, Glass and yet another Argentinian, Alberto Ginastera, whose centenary is celebrated in 2016.

As The Guardian wrote of an earlier release in Warner Classics’ Argerich-Lugano series: “Even when Argerich is not directly involved, her unique musical spirit seems to hover over the performances; there's a freshness, a sense of discovery, about all the playing here.”