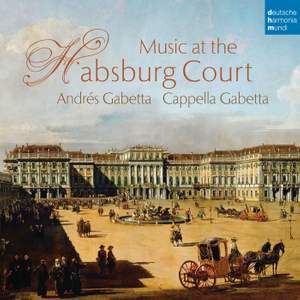 Music at the Habsburg Court

Immensely feel-good stuff…with toe-tapping tunes and plenty of virtuoso showing off. Gabetta’s playing itself is neat-fingered, lean-toned and full of nuance, supported by an ensemble clearly... — Gramophone Magazine, September 2016 More…

Umstatt: Concerto No. 6 for Violin, Strings and Continuo in B-Flat Major

Umstatt: Concerto No. 5 for Violin, Strings and Continuo in C Major

This new recording by "Capella Gabetta", the ensemble founded by Sol Gabetta & her baroque violin playing brother Andreas Gabetta, features music performed in the Austrian Habsburg court from the end of the 16th century through to the 17th century. During this era the Hapsburg court was actively incorporating Italian music. Except for the Vivaldi, the album concentrates on the work of the more unfamiliar composers, with an emphasis on the solo violin, expertly performed by Andreas Gabetta. The "Cappella Gabetta" has enabled Sol Gabetta to make one of her musical dreams come true. She, her brother – concertmaster Andres Gabetta – & a hand-picked team of highly qualified musicians from the same musical background devise repertoires of baroque & early classical music which they perform on original instruments at concerts & in the studio. As well as performing masterpieces by famous baroque & early classical composers, the Cappella is also keen to introduce audiences to rare gems by lesser known composers such as Giovanni Platti, Fortunato Chelleri, Andrea Zani & Johann Adolph Hasse. It has developed a particularly close working relationship with Schloss Wiesentheid music archive. The ensemble was established in December 2010 & has already made very successful guest appearances in Paris (Salle Gaveau), Hamburg (Musikhalle), Munich (Prinzregententheater), Zurich (Tonhalle), Berlin (Philharmonie) and Istanbul, as well as at illustrious festivals such as the Bremen Music Festival, Festival Baroque de Lyon, Rheingau Music Festival and others.

Immensely feel-good stuff…with toe-tapping tunes and plenty of virtuoso showing off. Gabetta’s playing itself is neat-fingered, lean-toned and full of nuance, supported by an ensemble clearly enjoying themselves…great fun and beautifully played

The constant quest for rare pieces of repertory continues, and this collection explores some very little-known names...The real unknown here is Joseph Timmer, one of a prolific family, whose Concerto à 5 has not been recorded before.