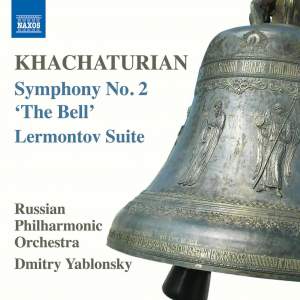 A recording to rival the competing versions — MusicWeb International, 27th May 2016

Khachaturian: Symphony No. 2 in E Minor "The Bell"

I. Introduction, "On the death of the Poet": Andante maestoso

Besides his ever-popular ballet Spartacus (Suites Nos. 1–3 are on Naxos 8550801), Khachaturian also wrote other stage music, including a splendid score for Boris Lavrenyov’s play about the great Russian author Mikhail Lermontov. The composer described his powerful Second Symphony, written during the final years of World War II, as ’a requiem of wrath, a requiem of protest against war and violence’. At crucial junctures, three tubular bells toll, giving the symphony its memorable subtitle. There are several versions of Symphony No. 2 in circulation and this recording uses the Muzyka 1969 edition of the score.

A recording to rival the competing versions