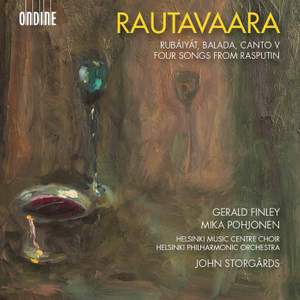 III. Here with a loaf of bread

IV. We are no other than a moving row

Rautavaara: Into The Light Of Light Canto V

Rautavaara: 4 Songs from the Opera Rasputin

No. 2. Koston aika (The day of vengeance)

This new recording by Ondine includes the world premiere recordings of four works by the celebrated Finnish contemporary composer Einojuhani Rautavaara (b. 1928).

Rubáiyát (2015) is a song cycle based on the poetry of Omar Khayyam (1048–1131). The work was written for Gerald Finley who in this recording sings the solo part of the orchestral version of the work.

Balada (2014), based on texts by Lorca, is a large-scale work for tenor, mixed choir and orchestra. Tenor Mika Pohjonen sings as the soloist. This cantata was premiered in Madrid in May 2015.

Into the Heart of Light (Canto V; 2012) is the composer’s latest installment in a series of works for string orchestra that share the title Canto. Rautavaara wrote the first of his Cantos in the 1960s, and each piece in the series have represented well the latest stylistic developments by the composer.

The concluding work of the recording is Four Songs from the opera Rasputin. These dramatic songs were arranged by the composer for mixed choir and orchestra in 2012.

In the last two decades the Helsinki Philharmonic Orchestra - conducted in this present recording by John Storgårds - has released several award-winning recordings of the music of Einojuhani Rautavaara.

John Storgårds and the Helsinki Philharmonic, in fine form, record a selection of [Rautavaara’s] recent, largely vocal works…well worth hearing

Four rewarding works by Rautavaara but the exceptional Rubáiyát, magnificently performed by Gerald Finley, is alone worth the price of the disc.

It’s hard to fault the performances...Canto V finds the Helsinki Phil sounding alert and committed under John Storgards, the Helsinki choir gives it loudly behind spirited tenor Mika Pohjonen in the Balada, and Gerald Finley makes rousing stuff of Rubaiyat.