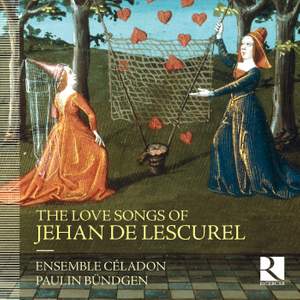 These are all performances on a very high level. No purchaser will be disappointed — Gramophone Magazine, August 2016

Many mysteries surround the life of Jehan de Lescurel, beginning with his date of birth. Probably the son of middle-class Parisians, cleric, musician and poet, he was most likely trained at Notre-Dame. His oeuvre consists of some thirty songs written in the waning tradition of the art of the Parisian troubadours and even broaches polyphony. In them, he describes several amorous situations, sometimes depicting the emotions of the rejected suitor, sometimes those of the beautiful misunderstood lady, in a game of love and feelings that range from nostalgia to ecstasy, and not excluding humour. In this complete recording, the three voices of Céladon are backed up by richly coloured instruments.

These are all performances on a very high level. No purchaser will be disappointed