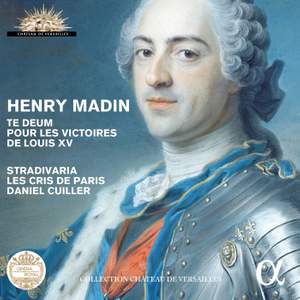 [Madin] writes vividly…[and] Daniel Cuiller is well in command of his forces in both pieces; worth investigating — Gramophone Magazine, August 2016

For the first time since its premiere in the eighteenth century, Henry Madin’s Te Deum for the victories of Louis XV rang out in 2015 in the Chapelle Royale at Versailles. Stradivaria, the Baroque ensemble of Nantes directed by Daniel Cuiller, and Les Cris de Paris, the chamber choir conducted by Geoffroy Jourdain, here revive the work of this composer born in Verdun in 1698 who was sous-maître de la Chapelle du Roi from 1738 onwards. The performance of the Te Deum, the longest setting composed during the Ancien Régime, is coupled with Diligam te, Domine, one of Madin’s principal works in the style of the grand motet for large chorus. At the single concert immortalised here, the two works came back to life in a highly symbolic historic venue. They are presented today in the Alpha/Château de Versailles Collection, which now includes more than ten titles.

[Madin] writes vividly…[and] Daniel Cuiller is well in command of his forces in both pieces; worth investigating