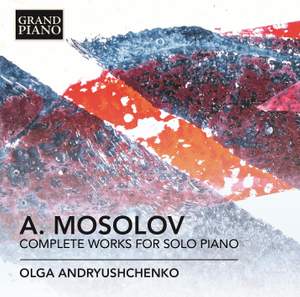 Mosolov: Piano Sonata No 2 in B minor, Op. 4 "From Old Notebooks

Alexander Vasilyevich Mosolov was one of the most prominent Soviet experimentalist composers of the 1920s. Famed for his futurist orchestral piece The Iron Foundry, this ‘constructivist’ began to forge new directions through his use of motor rhythms, percussive attacks, and melodic angularity. Imprisoned for eight months in 1937, he later sank into undeserved obscurity. In the four surviving Piano Sonatas, Mosolov shows himself to be one of the boldest and most complex Russian composers of his time.

These are outstanding performances from Olga Andryushchenko of works that deserve to be heard…the sonatas, in particular, are impressive and, though Scriabin’s spirit runs through much of these compositions they are fine works in their own right