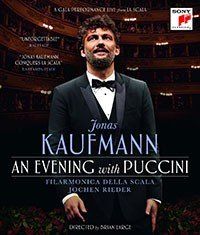 Jonas Kaufmann: An Evening With Puccini

To pick out a few highlights, his declamation and tenderness, as well as his ability to colour his insights into character and situation into tone and text, are all well represented in the extract... — Opera, October 2016 More…

On the 14th June 2015, German tenor Jonas Kaufmann walked onto the stage of La Scala Milan, the home of Italian opera, for one of the most highly anticipated performances of last year. The concert of Puccini arias made national news in Italy, and following five encores and 40 mins of applause audiences were still left wanting more. This legendary performance is now the focus of a new concert film “Jonas Kaufmann – An Evening of Puccini”, directed by Brian Large and produced by Arts Alliance. Cinema audiences worldwide experienced this unforgettable event, and now viewers at home will be treated to a revealing introduction to Puccini – the man, the musician, the superstar – narrated by Jonas and featuring rare archive footage. Jonas Kaufmann‘s La Scala concert programme contains a selection of Puccini’s hit tenor arias of which all appear on on the Classical No. 1 album – “Nessun dorma – The Puccini Album”.

To pick out a few highlights, his declamation and tenderness, as well as his ability to colour his insights into character and situation into tone and text, are all well represented in the extract from Act 2 of Edgar. His ‘Donna non vidi mai’ (Manon Lescaut) sounds dreamy, even thunderstruck: he saves the passion for his angry, confused ‘Guardate, pazzo son’ from Act 3 of the opera.